The Distinguished Women Awards is Girl Scouts of Central Maryland's signature fundraiser, attended by more than 350 business, civic, and community leaders. The event honors five local women leaders for their exemplary professional accomplishments and community contributions. Honorees are paired with a high school-aged Girl Scout, who spends a day with the Honoree to shadow her in her role and learn more about how she navigated her career.

To request a Zoom link to the Distinguished Women Awards celebration email: distinguishedwomen@gscm.org.

Born and raised in Baltimore, Ms. Darby is active in the community and is currently the president of the Maryland Women’s Heritage Center and secretary of the LEADERSHIP Baltimore County boards of directors. Ms. Darby is also an Executive Alliance board member and co-chairs its Effective Impact Mentoring Committee. She is a 30-year member of the Junior League of Baltimore, an organization on whose board she has served numerous times including serving as its president in 2001-02.

In 2006, the Baltimore Business Journal named Maria one of Baltimore's Top 40 Under 40; in 2017, Ms. Darby was inducted into The Daily Record’s Maryland’s Top 100 Women Circle of Excellence, having been honored previously in 2009 and 2011; and in 2012, she was named The Spirited Woman of Baltimore for her service, dedication and commitment to excellence.

Dr. Frances Murphy (Toni) Draper was named chairman of the board and publisher of the AFRO-American Newspapers, which was founded in 1892 by her great-grandfather. She was president of the company from 1987 to 1999. She has been an influential community leader in her native Baltimore for decades, with leadership positions in journalism, a church she founded and education.

Draper received a bachelor’s degree in Spanish language education from Morgan State University and was on the university’s Board of Regents for 25 years before stepping down in June. Draper also has master’s degrees in education (Johns Hopkins University), business administration (University of Baltimore) and pastoral counseling (Loyola University Maryland). In 2006, she received a Doctor of Ministry degree in preaching and leadership from the United Theological Seminary in Dayton, Ohio.

Draper serves on the boards of the National Newspaper Publishers’ Association, the Y in Central Maryland, the Fellowship of Christian Athletes (Baltimore City) and the Advisory Board of Results Baltimore. She also is a member of the Executive Alliance.

Cheryl has been with T. Rowe Price since 1989, beginning in the Fixed Income Division where her early responsibilities included trading across an array of fixed income markets, including high-grade corporates, mortgages, and structured products, as well as foreign currencies. In 1997, she became a taxable portfolio manager, and in 2015, she assumed her current role.

Cheryl earned a B.S. in economics from the University of Baltimore and an M.B.A. from Loyola University Maryland. She also has earned the Chartered Financial Analyst® designation.

Dr. Kim Schatzel began leading Towson University as its 14th president on January 26, 2016. She holds a Ph.D. in Business Administration, with a concentration in Marketing and Technology, from Michigan State University. Her research interests focus on product innovation, new product success, and marketing communications.

President Schatzel is one of less than two percent of university presidents that have extensive business and private sector experience, spending more than 20 years as a corporate leader and serial entrepreneur in the technology and advanced manufacturing sectors. As part of her new venture experience, Schatzel founded and served as the President, Chief Operating Officer, and later Chief Executive Officer of a multinational advanced manufacturing firm with more than 1,500 employees on four continents.

Schatzel began her academic career as an Assistant Professor of Marketing for the College of Business at the University of Michigan-Dearborn. She served as the College’s Associate Dean starting in 2005 and as its Dean from 2008-2012. Schatzel served from 2012-2016 as the Provost and Executive Vice President of Academic and Student Affairs at Eastern Michigan University. She retained that role while guiding the university as its Interim President for six months. Schatzel serves on the Board of Directors for the University of Maryland St. Joseph's Medical Center, the Coalition of Urban and Metropolitan Universities, CollegeBound Foundation, Greater Baltimore Committee, Greater Economic Alliance of Baltimore and the Maryland Business Roundtable for Education. She also serves on the NCAA Division I Presidential Forum.

Her contributions to and leadership in Maryland have been recognized by The Daily Record, which gave her its 2018 Icon Honors; named her one of the 2017 Most Admired CEOs, 2017 Top 100 Women and 2017 Most Influential Marylanders; and included her in its inaugural Power 100 list in 2021.

Doris Zografos’ career path began in 1979 after graduating high school at the age of 16. As a young woman without real mentoring or funds for high education, Doris followed the same career path that her mother took in the early years of WWII. Like her mother and before her 22nd birthday, Doris attended and graduated from the same three-year hospital-based nursing program, became a registered nurse, married, and gave birth to her first child.

Doris returned to college and eventually obtained a Bachelor’s degree in Nursing and Science. Education provided more opportunity, but she realized a career in business, not nursing, was her path. Working with her late husband, an engineer, and with another couple, they started an industrial painting company which grew to include painting the Chesapeake Bay bridge. This business partnership terminated. However, after raising three children as a single parent and winning a long and painful two-year battle with breast cancer, Doris was able to successfully start and build her own company.

In 2010, EASE Painting and Construction Inc. (EASE) was established to provide industrial and marine environmental and coating services to private, municipal, city, state and federal customers including the United States Coast Guard, NAVY and Air Force. EASE has grown from three employees to over 30 and has been awarded over 300 contracts that have taken her painting crews to over 20 states that include California, Washington, and Oregon. Recently, EASE was awarded a five-year contract from the U.S. Department of State to maintain embassies and consulates’ concrete fresh water tanks world-wide.

Each year, five high school-aged Girl Scouts are selected to serve as Shadow Girls as part of GSCM's annual Distinguished Women's Award Celebration. Each Shadow Girl is paired with an honoree and has the opportunity to spend the day with her. During their day together, Shadow Girls experience a typical day in her mentor's role and learn more about how she navigated her career. The Shadow Girl Program is an excellent way for girls to explore career interests and learn more about the female leadership experience.

Click here to learn more about the Shadow Girl program. 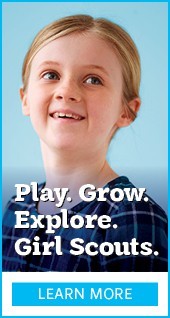